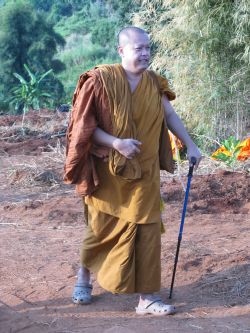 I arrived in Siam (thru the big ugly new airport) on November 16th. The next day I flew to Chiang Mai in the north and immediately caught a 3 hour bus north to Fang district, which is near the Burmese border. Old friends from Suan Mokkh — Ven Kittisak & Mahacherd — have been looking after a monastic residence there, publishing books related to Ajahn Buddhadasa, and working with local communities, including homeless hill people. Getting out of Bangkok right away was good for jetlag.

Ven Kittisak & friends were planting trees with an interesting mix of college students, novice monks, activists, & hill people. Unfortunately, a serious drought is expected, so watering methods will have to be set up & financed. Just another impact of global warming that the dithering in Washington, Beijing, Copenhagen, & elsewhere will do nothing to address. (Our world is run by political cowards because we prefer to let them do it so we can indulge in other things.) 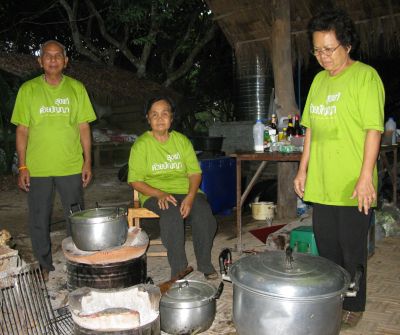 Meals were prepared by the mother of Ven Kittisak and the parents of Ven Supot. Ven Supot’s parents remain heartbroken over their son’s murder 4 years ago. They spoke of how he shared with them the Dhamma he learned from Suan Mokkh and how he had inspired them and their other children to practice more seriously. Still, they are living with the results of the tragedy as well as anyone might.

Also there is the new public prosecutor assigned to the case. The previous one was chosen to avoid any real investigations, as the people behind the murder have ties with powerful political figures, including the former PM Thaksin. With the latter’s ouster, it’s now politically possible to pursue the case and the prosecutor was guardedly hopeful that he could successfully press charges against the police & other behind the murder. Two of the three men believed to have actually carried out the murder have since died under questionable circumstances. 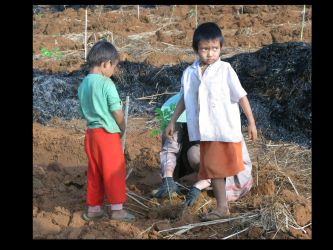 what kind of world are we passing on to them?

This entry was posted in Siam. Bookmark the permalink.