After Fang, I caught a ride to Mae Rim, a district on the way back to Chiang Mai city. Along the way, Bear, the man giving me the lift stopped to see some NGO friends, including an innovative street theater group’s training center amidst rice fields.

Eventually, I arrived at the training center of Ouyporn Khuankaew, who does a lot of work with women throughout northern Siam, as well as Burma, Ladakh, Nepal, and other Asian Buddhist countries. Ouyporn was hosting a relaxed gathering of Think Sangha, at least those who has survived the just finished 20th anniversary conference of INEB. I wasn’t able to make the conference, tho I had originally hoped to, but wanted to catch some old friends while I had the chance.

Our main activities were resting up — the others were exhausted from the conference and I was from cabin building & travel — enjoying each others’ company, drinking tea, and taking strolls. That’s part of what Sangha is about.

We also brainstormed plans for a substantial meeting for early 2011. We will explore the need for grounding engaged buddhist work not only in personal practice but also in strong community. This is a theme that is right up LP’s ally.

On the second day some of us got massages from a local woman. She was so good I got carried away and told her to give me the works & not hold back. I figured by sore body — from many weeks of building — could use it. While it helped in the long run, I was even more sore the days immediately following the massage 😉 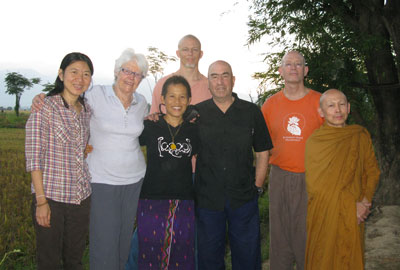 Most of the gang, tho a few had already caught planes home