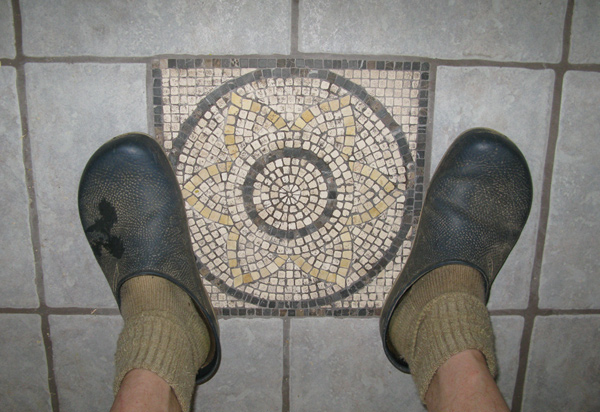 Apologies for the long gap between last posts and this one. For a while, the reason was me putting most of my energy into work on the cabin, with nice progress being made. And at times resting up when I overdid a day or two. Then I spent a few days driving to & from and visiting in & around Chicago last week.

However, nestled in the above words are hints of something that Nature-Dhamma has brought sharply to my attention — again. I need to listen more to my body’s needs & signals than is my habit, and be less intent on getting things done (like the cabin or restarting teaching or travel).

Last week, a toothache developed along with a small rash near left eye. After toothache worsened and I saw a dentist, while visiting around Chicago, I started taking a pain med, but didn’t think anything more was going on. Then the rash grew a bit and Jo Marie suspected shingles.

We went to the local clinic as soon I returned from Chicago (along with old buddy Viriya, who had flown in from Munich) and confirmed that shingles had erupted. Started antiviral med (a familiar one from infectious episodes during chemo) then and had blood counts done. We saw Dr Thompson at Mayo on Tuesday and there’s no evidence of lymphoma returning, but this is related to a severely compromised immune system. The last bit hadn’t registered with us; we thought the immune system would be steadily improving. Now we realize it will take at least another year, probably even longer. In some cases, it never gets back to “normal.”

Shingles is not life threatening but the patch near my eye needs to be watched. Shingles in the eye can cause long-term damage. So far it has stayed out of my eyes and is limited to the left side of my face. The rash worsened since Saturday but now the swelling seems to have peaked. It still looks rather ugly but I don’t need the pain meds (vicodin, ibuprofen) any more. What I need lots of is more rest and some smarts. Jo Marie is trying to inculcate the latter.

Old habits die hard! After a serious illness (which isn’t actually over yet), there’s an urge to  get back to “normal.” But who knows what that is, and there’s no guarantee it is wise or healthy. Once again, I must learn to slow down.

For this and other reasons, Viriya and I are talking about kayagatasati (mindfulness grounded in the body). The Buddha made this a foundation of practice not to be forsaken for fancier forms of so-called vipassana.

Best wishes to all. Please heed the messages of Dhamma-Nature.

This entry was posted in Dhamma, General, SK's healing. Bookmark the permalink.