Two trees were planted by the old foundation* that is just uphill from our barn, a white pine and a tamarack. Old and stately. Their are a few other white pines in this valley, perhaps children of the big one, but no other tamarack. We are too far south for coniferous forest. Big beautiful trees until …

We noticed a slight lean to the tamarack last fall. An arborist said there was no immediate danger. This summer we noticed more lean, perhaps due to last year’s very wet spring and plenty of rain this spring & summer. Recently it was leaning enough to worry us, so I was planning to call the arborist Monday.

A thunderstorm intervened predawn Monday morning. When I went down to do chores at the barn I saw the old tamarack had fallen. Still looking big, once stately, but not tall enough to reach the barn as we had feared. Sad to see it go as it has been a companion since we arrived here and looked over, along with the white pine, the grove, creek, and mint patch for many decades, perhaps a century. In spring and winter especially the two have looked magnificent from up the hill. Now there is just the white pine. 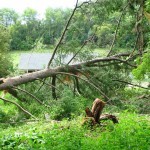 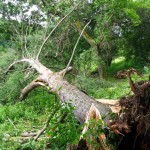 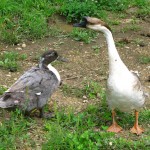 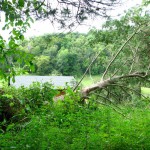 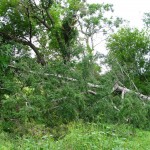 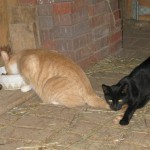 The grove above the barn will look much different now. Earlier, a dying butternut broke up. It was hollowed out from the ground up. The fallen tamarack damaged a box elder. The remaining butternut is managing but in poor health, as with most butternut in Wisconsin. Everywhere one looks with mindfulness are plentiful reminders of life-ageing-death on earth midst the beauty and change.

* We don’t know what it was the foundation of. The old homestead was probably built in the 1870s. Whatever it was, somebody chose to plant a white pine and tamarack nearby.