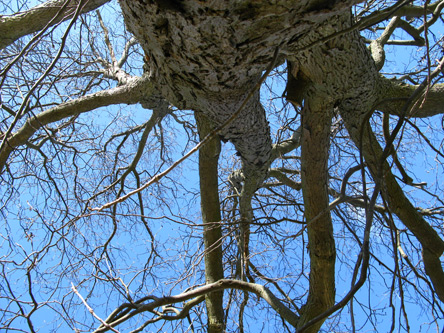 Uncle Hickory greets visitors who stroll up our drive, shades horses and humans on hot summer days, drops nuts for the squirrels and people, and watches over the entrance to this coulee. You can’t miss him if you walk up. He has been prominent in the original dream-vision that recognized this beautiful place and our home with it. Now, I check in with him regularly, especially when returning from a trip, and have entered a dialogue about balance, healing, and resilience.

Uncle Hickory’s prominence owes partly to his being in the middle of one of the few relatively flat parts of the valley, other than the bottoms flooded by rains and creek. He’s not too far from our entrance, nor too high up the slope, and has survived the old logging road that became our driveway. I wonder what he’s doing down here, while most of his brothers and sisters are up along the steeper parts of the slope or spread out back in the woods. Perhaps he’s a loner. Or precocious. Or a sentinel.

Uncle Hickory has lost branches to the electrical cooperative that has a small local line running beside him, from which we, too, draw power. The line dates back to WWII when copper was tight. Who was here first? Did he sprout beside the line or tolerate its imposition? Either way, he’s grown up beside it for many decades and suffered branches cut to maintain clearance. Further, trucks and tractors have rumbled over the logging road, compacting his northward roots, as have the cows that have grazed this land. Since we’ve arrived, delivery vehicles and occasional heavy equipment have abused his branches. He has sustained these wounds and seems to thrive. I feel great depth, strength, and resilience in him. 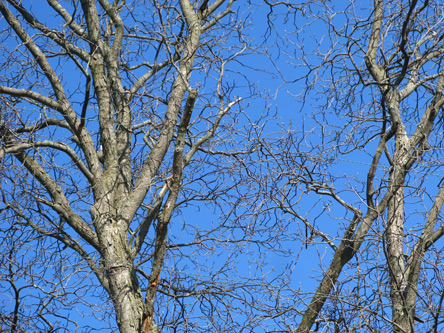 I hope, too, that he enjoys the Dhamma conversations, food sharing, and meditations where humans reveal our virtuous and convivial sides. It would be sweet if we bring more to him, and his coulee, than hurts and abuse.

Uncle Hickory’s scars – stubs that were once branches, chemicals in the air and soils, and living with electromagnetic radiation – remind me of my own. I carry many little artifacts of cuts and scrapes on hands, arms, and feet, as well as the abdominal scar where bits of bowel once dilated and ebbed within a little plastic pouch affixed to my belly. Within harbor emotional scars of growing up, of ideals violated, of loses, and of self-infliction. We all have such scars, hidden wounds, and currently open sores. We all live with modern industrial technology that tentacles the globe and pervades our bodies. Like Uncle Hickory, I believe, chemicals and electromagnetics, some very nasty, run through us. Can you feel them? Or does it take cancer, a growing epidemic among others, to make us aware? Through what sort of awareness does Uncle Hickory sense them?

There’s a strong push towards youth in our media-normed culture. Many of us long for pristine nature and health, pure water and air, uncontaminated food and soundscapes, beautiful vistas, and complete health and well-being. When such an aspiration takes root, happenings like cancer and depression separate us from what we’re supposed to be and create a level of ostracization, if not repugnance and rejection. When we identified with purity, wholeness, and absolute notions of health, we end up denying the scars and wounds that run through our lives. Which is our reality? The artificially enhanced stars of mainstream media and Disney movies, or the myriad forms of woundedness, such as, domestic violence, sexual abuse, emotional stuckness, cultural stagnation, economic oppression, racial profiling, homophobia, diseases of civilization, plastic food, love gone awry? 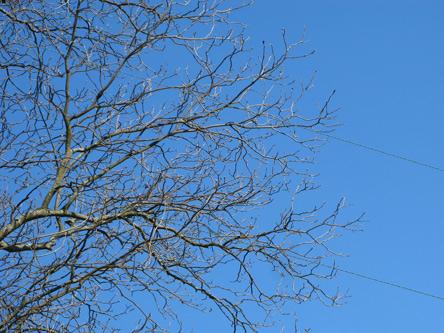 Uncle Hickory and I are having a conversation about this. It may last a long time, as such questions are not easily answered (remember the ents.) I’m clumsy in this kind of communication, tentative, groping, wondering if I’ll ever be sensitive enough, like Guan Yin hearing the cries of the world. I believe that Uncle Hickory is revealing that wounds and scars are as much of what we are as successes, talents, and accomplishments, and that they are an even more significant portion of our compassion and resilience. Life is brutal and beautiful. There is purity and pain. To grasp at just one side of the dynamic is to fantasize a chimera. When we hug and exchange kisses, we rub our scars, wrinkles, and flabby sections. Yet none of these get in the way of us standing tall in snow drifts or hosting families of birds or shading furry creatures.

Without wounds I would not feel compassion as much as I am able to do. Happiness and health did not teach me much empathy. Without hurts I wouldn’t need the love of others like I do. Though I still seek to be unconcocted by them, I don’t seek to escape or transcend them.

What strengths do we aspire to, to be without any wounds or to be resilient with woundedness? Is our healing in spite of the wounds, or to get rid of them, or through embracing them?

p.s. Just had quarterly CT-scan and blood work. No signs of returning lymphoma and some improvement in blood stuff, especially neutrophils and platelets. Looks like the bone marrow is doing better and immune system is stronger. The slow recovery continues.