Anapanasati: Mindfulness with Breathing In & Out

the newsletter of the Twin Cities Vipassana Cooperative

I am struck with curiosity how little modern Buddhists and teachers refer to the Buddha’s own most practical and systematic teaching on meditation — anapanasati, mindfulness with breathing in and out. We don’t often come across it in all the “how to meditate” books and tapes. Bits and pieces crop up here and there, perhaps, but seldom with the full context, subtlety, and power. Then again, one seldom finds traditional Buddhists mentioning it either. Oh well, expectations are fraught with danger and disappointment. Maybe religion isn’t meant to make sense. Digging into origins may be a minority preoccupation.

Still, for me this lacuna appears even curiouser when we realize that this form of meditation is the one the Buddha most often practiced himself, including before, after, and during the Great Awakening. To my mind, the Buddha’s own descriptions of what he regularly practiced deserve serious attention and inquiry. After all, anapanasati is a “dwelling” he frequented. Fortunately, Ajahn Buddhadasa Bhikkhu, Ven. Thich Nhat Hanh, and others have championed the sutta that lays out this practice and makes it accessible for those looking. 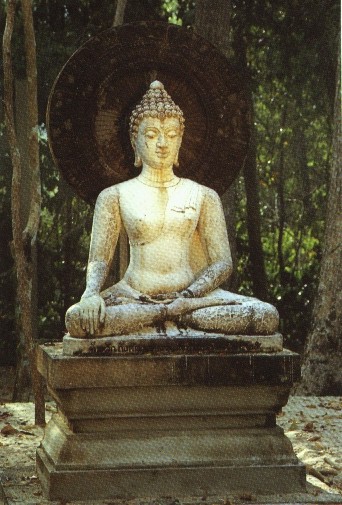 The Anapanasati Sutta gives us a roadmap for spiritual cultivation, realization, and liberation. Admittedly, it is more of an outline than a detailed exposition or “how to manual,” but that’s the case with all the Pali sutta meditation teachings. The oft referred to Satipatthana Suttas (D.22 and M.10) are more lists of possible practices categorized according to the four applications of mindfulness than systematic explanation of how to do any of them. (The systems came much later, e.g., in the Vissuddhimagga.) Metta is obviously important in the suttas, but you’ll search in vain for methods of how to do it, especially as a “meditation.” (These, too, came later.) Yet, the Anapanasati Sutta (along with related passages in the Vinaya and Anapanasati-Samyutta) provide the outline of a complete system of practice, more detailed than any other (except, perhaps, the descriptions of decaying corpses).

Further, this sutta offers a vision of progressive development unfolding through diligent, regular, intelligent, subtle practice rather than force, will-power, or concoctions of thought. This echoes an important theme in some of the more profound early suttas, which Ajahn Buddhadasa speaks of as “Dhamma flows into Dhamma naturally without anyone needing to intend.” We don’t make things happen mechanically so much as skillfully cultivate conditions, mindfully avoid distractions and pitfalls, and open to unfolding Buddha seeds. The Buddha’s subtlety is evident in how he describes natural processes and how we can interact with them skillfully (not that there is any real distinction between us and the processes), rather than a “getting results” approach focused on attainments. The potentials are always here and need remembering, but right practice requires wise aspiration, not goal oriented desire. Nevertheless, clear direction is crucial and this sutta provides it.

The sutta begins with the Buddha announcing that he will speak at the end of the Rains. This allowed a large number of monks, elders, and teachers to congregate. (Perhaps many nuns were there, too, hidden within the patriarchal language.) The Buddha praised the various realizations and practices within the assembly, then pithily announced that “mindfulness with breathing in and out that one has developed and made much of perfects the four applications of mindfulness … the seven factors of awakening … knowledge and liberation.” He then explains how each level of anapanasati develops progressively higher, which can be summarized as:

Throughout, sati is grounded in breathing in and out. With this wonderful anchor, mind is refined, explored, realized, and liberated — all while breathing in and out. We start with awareness of a simple bodily process and nurturingly follow the unfolding as far as we are able, potentially to the highest realization.

Mere mindfulness of breathing is insufficient for the full unfolding of our lives. One must be mindful of and investigate more subtle realities of mind and Dhamma, including voidness and Nibbana itself. Still, the breathing is a fine foundation for all of that, as well as haven, rejuvenator, and anchor. Just learning the ins and outs of healthy breathing is worth the daily effort.

Once able to practice on the level of satipatthana, sati is developed to the level of bojjhanga (factors of awakening). Not just mindful of something as some “thing” with its own little story, sati as bojjhanga includes more basic levels of mindfulness and further is “based upon solitude, fading away, and quenching, and matures in release.” These terms describe “states” (dhammas) closely associated with the highest stages of realization and with Nibbana. Mindfulness and samadhi are homing in on the end of suffering. This natural unfolding culminates in true knowledge and liberation (vijja-vimutti), which are synonymous with full and final awakening. Therein, sati and vipassana are perfected. You won’t find a better description of this anywhere else in the suttas. Our highest aspiration is modeled by the Buddha and his teaching of the Anapanasati Sutta invites us to follow in his footsteps.

This practice may not suit everyone. The Buddha admitted diversity and personal discernment in such matters, and we are encouraged to find what truly works best for each of us. Nonetheless, we do well to recognize that anapanasati suited the Buddha and many leading disciples quite well. It may just as well suit those of us who seek the same wisdom, realization, freedom, and coolness the Buddha found.

Ajahn Buddhadasa’s detailed discussion of the sutta, along with a translation, is published as Mindfulness with Breathing: a manual for serious beginners (Wisdom, 1988).

I hope our upcoming retreat at Christine Center will allow us to explore this material more thoroughly.

Technology of Breathing | Getting Started with Anapanasati