We hope the end of 2008, finds you well, safe, and content. Globally, nationally, and personally for many, it’s been an eventful year on many fronts, and on other fronts slow and steady. That peculiar mix has been true at Liberation Park as well. 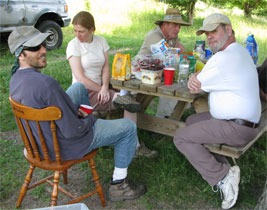 Liberation Park saw a steady flow of guests and visitors through the summer months - all hardy folk who are amenable to LP’s rustic accommodations. After our first two years of leaps and bounds progress, this year was more about deepening and waiting, as we finished half-done projects, attended to daily chores and maintenance, and listened for a fuller understanding of how this valley will shape and be shaped in its current incarnation as Dhamma refuge. As we get to know the land more intimately, exploring nooks and crevices, old homesteads and mysterious rock formations, we have a greater inkling of who lived here in the past, human and otherwise. As we experience the range of seasons this climate has to offer, we appreciate how simultaneously blessed and difficult their lives may have been. We imagine how our future might be the same - blessed and difficult - for different reasons and in different ways, but still grappling with the impossible juxtaposition of gift and challenge, appearance and ending, the Dhamma of cyclic existence. 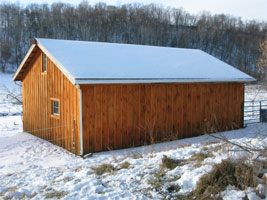 The barn was finished beautifully this summer by a carpenter elf named Roger who appeared for several months from the West Coast, graced us with his skills, and disappeared again over the horizon. We hope to see him again.

Several of LP’s regular and much appreciated laborers devoted hours of spring time to building a TALL deer proof garden fence and starting a few beds. Santikaro nurtured seedlings bought and gifted from both Amish and English neighbors, and we had bountiful tomatoes, basil, cabbage, and peppers. A rich composting bin is well underway and is cooking still under several inches of snow. We planted a bit too late for the cucumbers and squash to thrive, but we’ll try again next year.

Some progress was made on the first and largest cabin, with the sub-flooring insulated and sealed. It will be un-tarped next spring and become the primary project of 2009, pending funding. 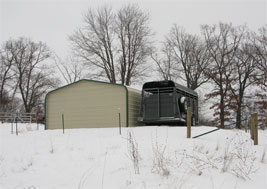 A small leveled and graveled parking area with a carport (for wood storage) appeared in the last several weeks and a fence surrounding it will be completed this week.

Friend and fellow driftless denizen Susan Cushing gifted her beautiful, hand painted seventeen foot Tipi. It will be erected and warmed by a wood stove this month. The hand-harvested poles, now golden and shiny, have been stripped, shaved, sanded, and oiled by several of us in turn. Two were given Jera's personal touch when he attempted to stand on them.

Santikaro spent the spring harvesting wild greens, the fall harvesting wild nuts, and a graciously loaned cider press produced gallons of apple cider from the orchard. With the cattle off the land, our neighbor’s may think we’re growing weeds, but the birds, rabbits, deer, and other critters know differently. Nature’s bounty is in clear view. The horses waded in grass to their bellies enjoying the full cycle of re-seeding for the first time in years.

With Santikaro traveling and teaching a great deal this year and Jo Marie back in the nursing work force, we have found ourselves these months with ever lessening time for building of the refuge. Again and again we surveyed the projects in process, and those only thus far dreamed, and had to remind ourselves of Ajahn Buddhadasa’s maxim “It’s finished every day!”

After completing the first main cabin, the next priority will be kitchen and shower facilities to make retreating accessible to more than just those hardy campers who currently practice here. 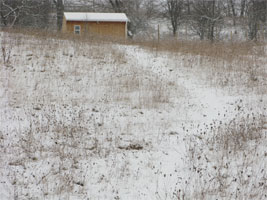 Thus far we’ve been able to pay our basic monthly bills with income generated, but development and building have come primarily from savings, which has been greatly depleted. With the current economic hardships we don’t expect great windfalls of development funds in the near future, so we look towards the coming years with some curiosity. With the help of good friends and a little creativity, we LP worker bees will continue to hand-build facilities as funding and labor are available. The pace will be what the pace will be as we let go, let be, and enjoy the work. We’ll continue to practice and ponder, build and harvest, and to offer what we can. We hope you will join us as we endeavor to follow in the footsteps of our teachers and exemplars in addressing the great questions of existence with humility and gratitude.